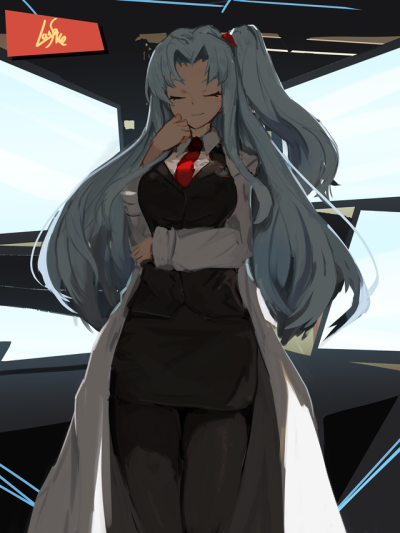 Alone in space and time I keep changing
It's the new reality beginning in a new realm,
Only you can change this era
Don't miss out on the most powerful legend,
if you can keep up...
Blood Drain -Again-
Snow Sisters
Doll Judgement
Somnium
Name: Eua
Age: 20
Allegience: Sato Household
Deck Theme: Eua uses a branch of Cyberse with no real archetype, she considers herself a jack of all trades, sacrificing archetypal power to instead focus on nearly all kinds of summons - Ritual, Fusion, Synchro, Xyz, and Link with strategies ranging from swarm to beatdown, to simply amassing resources.
Partner: Linkuriboh
Ability: She seemingly lacks the ability to manipulate or conduct Karma, granting her no special abilities or the capability to learn ones. However, her cards seem to posses special properties simulating Karma Abilities. [Will add later]
Bond Ability: [Will add later]

Personality: Eua is the unofficial "leader" of the Triumvirate's Sato branch. While she has no real connection to the other two leaders or Shinobu herself, the latter's selfish focus on her "treasures" led to her never being there to supervise or contribute to any projects besides a few tips here and there. Being Shinobu's secretary, and one of the employes that was the closest to her, Eua along with her two sisters - RACHEL and ASENAT took it upon themselves to lead in Shinobu's.. frequent, absence.

Eua herself is devoted to science, always looking for the deeper and more logical reasoning behind everything, supernatural or not. She has a blunt personality and rarely shows any emotion. However, she cares for the entire Sato Family and even seems to take after Shinobu's curiosity for other people.